An American Werewolf in London (1981)

Two American students are on a walking tour of England and are attacked by a Werewolf. One is killed, the other is mauled. The Werewolf is killed, but reverts to it's human form, and the townspeople are able to deny it's existence. The surviving student begins to have nightmares of hunting on 4 feet at first, but then finds that his friend and other recent victims appear to him, demanding that he find a way to die to release them from their curse, being trapped between worlds because of their unnatural death.
Posted by angelvamp13 at 11:15 PM No comments: 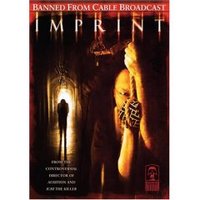 Set in the mid 1800s, Christopher (Billy Drago) is a young American journalist who ventures to Japan to search for the Japanese prostitute he loved and abandoned years earlier. But when he ventures to an island off the coast, he sees that human demons and whores rule the land where a deformed courtesan awaits his arrival leading to a tale of extreme cruelty and perverse vengeance.

Young couple Madeleine and Neil are coaxed by acquaintance Monsieur Beaumont to get married on his Haitian plantation. Beaumont's motives are purely selfish as he makes every attempt to convince the beautiful young girl to run away with him. For help Beaumont turns to the devious Legendre, a man who runs his mill by mind controlling people he has turned into zombies. After Beaumont uses Legendre's zombie potion on Madeleine, he is dissatisfied with her emotionless being and wants her to be changed back. Legendre has no intention of doing this and he drugs Beaumont as well to add to his zombie collection. Meanwhile, grieving 'widower' Neil is convinced by a local priest that Madeleine may still be alive and he seeks her out.

Dominion: Prequel to the Exorcist (2005)

Years before Father Lancaster Merrin helped save Regan MacNeil's soul, he first encounters the demon Pazuzu in East Africa. Merrin's initial battle with Pazuzu leads to the rediscovery of his faith.

Zombies rule the USA, except for a small group of scientists and military personnel who reside in an underground bunker in Florida. The scientists are using the undead in gruesome experiments; much to the chagrin of the military. Finally the military finds that their men have been used in the scientists' experiments, and banish the scientists to the caves that house the Living Dead. Unfortunately, the zombies from above ground have made their way into the bunker....

Simon Cordier, a sculptor possessed by an evil spirit, hires a model to pose for him then learns thereafter that she has been brutally murdered.

A plane crashes in the jungle. One of the survivors gets lost and while trying to find a way out of the jungle he gets captured by cannibals. He is humiliated, stripped naked, and thrown in a hole with a bird for a while. Eventually, he escapes with the help of a cannibal girl and tries to find his plane so he can go home.

The Creeds have just moved to a new house in the countryside. Their house is perfect, except for two things: the semi-trailers that roar past on the narrow road, and the mysterious cemetary in the woods behind the house. The Creed's neighbours are reluctant to talk about the cemetary, and for good reason too.

Doctor Channard is sent a new patient, a girl warning of the terrible creatures that have destroyed her family, Cenobites who offer the most intense sensations of pleasure and pain. But Channard has been searching for the doorway to Hell for years, and Kirsty must follow him to save her father and witness the power struggles among the newly damned.
Posted by angelvamp13 at 2:40 PM No comments:

Highschool geek Arnie Cunningham falls in love with "Christine", a bright red 1958 Plymouth Fury which has seen much better days. Setting himself the task of restoring the car to its original condition, his friends notice that the car is not the only thing that is changing. Arnie seems to spend more and more time with his car. He's also developed a sort of cocky arrogance which does not seem like the real Arnie at all.

Sgt. Howie travels to Summerisle to investigate a disappearance of a young girl. He discovers that the locals are weird and unhelpful, and becomes determined to get to the bottom of the disappearance.

And btw, Christopher Lee is so awesome in this. 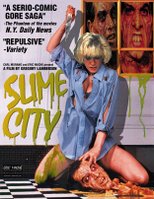 A student moves into a run-down building in New York City. His bizarre neighbors make a concoction in their apartment they call wine, but when he takes some of it, he turns into a deformed, murderous monster.

Isabella, a young model is murdered by a mysterious masked figure at a boarding house run by Max Morlacchi and his lover Countess Cristiana Como. When Isabella's boyfriend is suspected of the killing, her diary, which apparently has some incriminating evidence linking her to the killer, dissapears, the masked killer begins killing off all the models in and around the house to find the diary.
Posted by angelvamp13 at 3:40 PM No comments:

This is going to be my new movie viewing log. I'm a big dork and will use it to track the films I watch starting (probably) tomorrow. To see a complete view go to: http://www.film-talk.com/forums/index.php?s=&showtopic=9440&view=findpost&p=137592
Posted by angelvamp13 at 10:33 PM No comments: